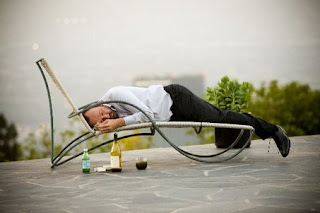 A neurotic young writer in the film Shrink (2009) has the following quotation from novelist Norman Mailer pinned over his writing desk: "I don't think life is absurd. I think we are all here for a huge purpose. I think we shrink from the immensity of the purpose we are here for. " Not surprisingly, the "huge purpose" for this character appears to be completing a screenplay. Sadly, this may also be the philosophy of the filmmakers--that nothing in life is more important than having real human experiences and then turning them into movies.

In short, the above-described character (who is not played by Kevin Spacey--he plays a celebrity psychiatrist experiencing an understandable depression after his wife's suicide) commits a terrible betrayal of two good friends, but all is forgiven when the result becomes what we are told is a good script and a "go" project. If only they had filmed that script.

To be fair, Shrink never bored me throughout its length, which could not be said of the execrable Cheri. But I am so hardpressed to sum this movie up or indeed to say anything definitive about it that it has taken me a couple of days to mull over this blog post. It has Kevin Spacey doing his brilliant self-loathing thing you've seen before, good as it is. It has disparate characters drifting around Los Angeles, in the manner of Paul Haggis's Crash, it has pushy agents and spoiled burnt-out movie stars and aspiring writers and psycho-babble and a sensitive yet troubled young (black) woman and another sharp but likeable ambitious young (white) woman and nothing that makes it necessary to see this film, but nothing that mars it especially. This is one of those projects from which the term "small film" derives. Not bad, just small.