Pardon me, your seams are showing 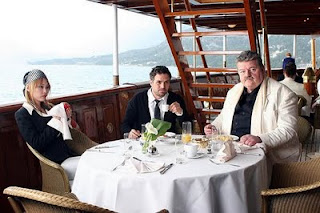 I was really looking forward to The Brothers Bloom (2008), as it was written and directed by Rian Johnson, creator of Brick, one of my students' best-liked films in my Film Studies course. And I love con man movies, going back past even Hustle and The Sting to The Flim-Flam Man, Hot Millions and perhaps any of W.C. Fields's movies where he plays a crooked carney. (I confess I have never warmed to David Mamet's films such as House of Games and The Spanish Prisoner because the cons were so simple and obvious, and the manner of speech and action so deliberately stilted, sacrificing the quality of glibness which is one of the pleasures of the genre.)

But there is a built-in problem with con movies, especially since Matchstick Men. An inherent element of the genre is deceiving the audience. The result is that we audience members have been trained to trust nothing we see. We never can relax and enjoy the characters, so focused must we be on who is lying and how we are being misled. I was glad to see they had steered clear of the Bedtime Story/Dirty Rotten Scoundrels trope, in which the mark is actually the con. But the final con in Bloom rests on something which is impossible--love and trust between two cons. True, these two are brothers, but one thing becomes clear as you delve into con literature--the real professional con lives in a world devoid of other people. So I saw the wrap-up of this one coming (a first for me) and didn't buy it a bit.

It didn't help that the film has a choppy, disjointed quality. I was not surprised to learn that the rough cut of this film was quite long and that a lot was discarded--that appeared visible in the final result. Brick, although it existed in a make-believe time and place, rooted that time and place in a plausible, continuous reality. Brothers Bloom is so steeped in deception that when the title says "New Jersey" we KNOW it's a lie. (Especially if you've seen real mansions in New Jersey, like I have.) Never was I invested, never carried along.

Notwithstanding, the film is fun to watch, and there are much worse ways of spending two hours. It has a theatrical quality (Maximillian Schell appears to think he is performing in an opera) which is emphasized in the way it uses the 2:35 widescreen, often as a proscenium, especially when framing the two brothers together. Mark Ruffalo is always an asset to any movie. And this movie has two completely infalliable assets:

1. Rinko Kiyuchi -- Awesome. I would say that every movie needs one but then she would not be so special. Imagine if Harpo Marx was Asian and had dynamite.

2. Hats -- Best hats of any film since Bob Fosse died.