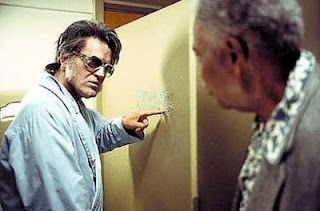 Under the self-imposed rules of this blog, I am required to reflect on every feature film I see. The only reflection I can record for Bubba-Ho-Tep (2002) is "What were they thinking?" I am all in favor of more Bruce Campbell films--but I say, more and better Bruce Campbell films.

It's not a bad premise, or rather, it's such a bad premise that it ought to be good. Bruce Campbell as either Elvis or a deluded Elvis impersonator teams up with an old black man in a wheelchair who claims to be JFK in order to defeat a good ol' boy mummy who is killing the old people. Not bad premise, right? I mean right there you already got 20-25 minutes of material.

Problem is, there's nothing else in this movie. What is enough of a story idea for a decent student film is stretched out to 85 interminable minutes. Bruce realizes something, chuckles, nods to himself. Then either he or I has gone senile, because he realizes it again, says it again, chuckles, nods to himself again. This goes on over and over. The only conclusion possible is that the movie itself has dementia and belongs in an old age home with its characters. Life is short. Skip this.
Posted by Lockhart at 10:45 PM