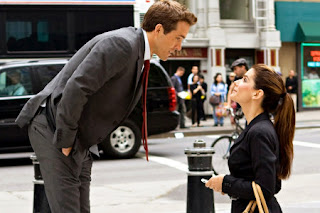 Romantic comedies are not so much made as engineered. Even more than action films, which can always fall back on fight sequences the way a musical film can always throw in a dance number, romantic comedies are the most dependent on the strictures laid down by the grand gurus of the film writing trade such as Syd Field and Robert McKee (neither of whom has written a hit film--the fact that many of their students have is a testament to Field and McKee's marketing skills, not their precepts).
If, as Walter Kerr wrote, farce comedy is a watch that laughs, The Proposal (2009) runs down about two-thirds of the way through. Two critical failure points: (a) A "zany" scene in which Sandra Bullock stumbles upon Ryan Reynolds's "wacky" grandma (Betty White now plays all of these characters, no matter the ethnicity of the other actors) performing a "kooky" Inuit chant. Not only is this scene a refugee from a 1960's sitcom (and presumably demeanting to Inuits) it reveals nothing about any of the characters, does not move the plot and is not funny. That scene is followed shortly by a scene in which we are meant to believe that Reynolds's character's father has paid for an INS agent to fly from New York to Alaska in order to threaten his son with jail. What??? Can you pay beaureaucrat's expenses in order to have them further your personal vendettas? Do you show your son you love him by threating him with five years in federal prison? Because your son refuses to go into the family business?
Oh, I forgot the scene where Bullock ditches Reynolds at the altar to uphold a principle, thereby leaving him vulnerable to arrest for criminal fraud.
I don't understand this because these scripts supposedly go through acres and acres of analysis and rewriting and testing and what-have-you. Please someone tell me that these idiotic ideas were improvised on the set. Because no one should have gone into production with a script as dreadful and implausible as this.
Too bad, because Bullock continues to prove herself the grand master (mistress?) of this type of material, and the contrast with The Blind Side is quite impressive. But Sandra Bullock the actress should fire Sandra Bullock the producer for putting her into this shabby mess.
Posted by Lockhart at 10:41 AM