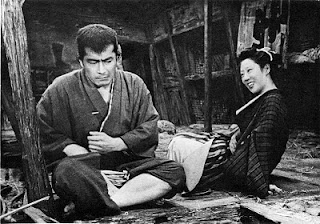 Faithful filmed versions of stage plays are always odd ducks (Andre Bazin called them "mixed cinema"). But a faithful version of a Russian play filmed in Japanese is, for an English-only speaker, a good example of making art with one or more arms tied behind your back. We have already dispensed with many of the aspects of cinema--montage, variety (of setting, costume, pace), and we are leaning heavily on the spoken word, which is a translation of a translation of a translation. So I'm surprised to learn that Kurosawa's film of Maxim Gorky's The Lower Depths (1957) has a following, even in America.

I haven't seen this play in the theater; it's not often done in the States, but evidently it's very popular in world theater, as it provides a wealth of roles for an evenly distributed ensemble. This makes sense for Japan, as a consensus culture, in which "standing out" is frowned upon. The characters are all denizens of a flophouse in the 19th century. In the film, Kurosawa is at some pains to develop the part of the thief into a decent role for alter ego, Mifune. The American play that most closely corresponds to it, The Iceman Cometh, is built around a central, star role, Hickey. Moreover, Iceman has a clear dramatic action--Hickey urges his flophouse friends to take action to change their lives, they try, they fail, they realize their "pipe dreams" are the only thing that keeps them alive.

Gorky's characters act as though they are trying to get out, although only one does--the actor who commits suicide. As in the play, the film sets this action outside; sets all action outside. The film is nothing but talk, and talk in Japanese. There is some mise-en-scene; an interior with canted supports that lend a strange atmosphere, an exterior which feels open and closed at once, the scurrying of the characters around the rat-trap. But there is little in the film that could be done as well or better in television, which would have moved closer to the actors' faces and revealed more, especially to the viewer in other languages. One can't help feeling that this film must have been a pot-boiler for Kurosawa, the way Hitchcock sometimes turned to readymade commercial properties such as Dial M for Murder biding his time between more commercial pursuits.

Kurosawa's film has a strange companion in film history, an earlier adaptation of the Gorky by Jean Renoir. Viewing the latter, one gets the sense that Renoir didn't care one way or the other about The Lower Depths, and was using the well-known title to build a film of his own on top of it. He has the charismatic stars Jean Gabin and Louis Jouvet, and took small suggestions from the text to build a new story for them. Unfortunately, undigested bits of Gorky still cling to the film like bits of stew burned to the sides of the pot. Unlike the Gorky and the Kurosawa, Renoir's characters are on the move--into the Lower Depths or out of them, which in a sense completely contradicts the idea of the piece. It doesn't work, but ninety minutes with Jean Gabin are almost always ninety minutes well-spent.
Posted by Lockhart at 8:10 PM