What is Edward Scissorhands? 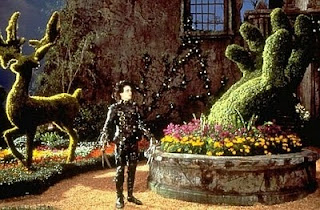 It's been called a fable, an allegory, a fantasy, a romance. I watched Edward Scissorhands (1990) with my Film Studies class as an example of a film in which production design (art direction, costume design, etc.) is an integral part of the narrative.

I can't call it a fable, because I couldn't tell you what the moral is. Nor does any likely allegorical parallel come to me. It certainly has elements of the fantastic, but one engages in fantasy in order to arrive at a pleasurable result, such as the triumph of goodness or romance or what-have-you. And the romance is indeed thwarted here. Edward cannot live with people, so he cannot live with love, although he knows what love is, and knows what he has been denied.

It must be a fairy-tale, a strict descendant of the sweet melancholic tales of Hans Christian Andersen which end in death or other forms of terminal loneliness. Psychologist Bruno Bettelheim taught us that fairy-tales that last do so because they speak to very deep and true things in the human psyche, disguised in sheep's and wolves' clothing. I loath to try and state the meaning of Edward Scissorhands in words--if one could do that, there would be no need for a film, but I know it is strange and human and true.
Posted by Lockhart at 3:28 PM