Who was Ann Dvorak? 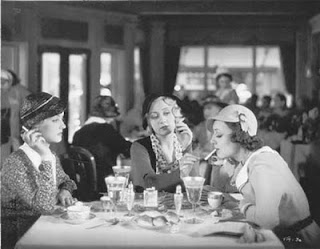 The chief asset of Three On A Match (1932), which circulates today as an example of the kind of racy storytelling that was possible before the Production Code took firm hold in 1934, is the surprising performance of Ann Dvorak.

I said it 13 years ago, and I reiterate it today--the Internet proves there is at least one person who is obsessed with anything one can think of. No sooner do I ask the question, "Who was Ann Dvorak?" than I find there is a website devoted to her work. Surprised to learn she started off as a hoofer, but maybe I shouldn't be. I think everyone at Warner Bros. started off as a hoofer, including Humphrey Bogart and Sidney Greenstreet!

What a delight to see a film like this, so rapidly-paced that the fade-outs look like lap dissolves and with a hard lesson and no punches pulled--no last-minute redemption or turnaround.
Posted by Lockhart at 10:07 AM