Who did they think they were fooling? 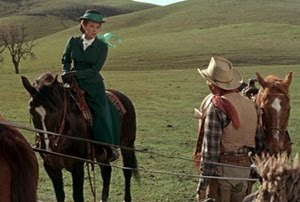 Watched The Rare Breed (1966) which is included in a James Stewart western package I acquired mostly due to the presence of three films directed by Anthony Mann to be discussed later.

Rare Breed holds some interest as an early example of a Western from the feminist viewpoint, and manages never to condescend to or ridicule the female characters for their independence and intelligence. But while showing respect for its audience in that regard, the film demonstrates contempt in another way. It is almost shocking to see a Western at this late date the relies so heavily on cheesy indoor sets in lieu of real outdoor locations, matte shots and even rear projection. Were these things still fooling anybody in 1966? I was 10 years old at the time and I can remember being annoyed by rear projection even years earlier. Was rear projection EVER convincing? To whom? Rare Breed goes so far as to have long shots in location intercut with inserts shot on a stage. Did something go wrong with the shooting schedule? Did Jimmy Stewart have a cold? (He couldn't have gotten one sitting in the fake snow used in this movie.)

One of the points of a Western is to get outside--see some mountains and grass and watch horses gallop around. An indoor Western is a violation of form. (One reason I've never cared for the revered Ox-Bow Incident.) It's bad enough when a weekly TV show like Bonanza shoots everything indoors. There's no excuse for a theatrical feature to do so.
Posted by Lockhart at 8:57 AM