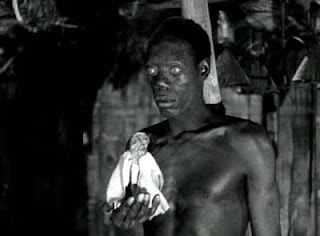 Attempting to address yet another gap in my film history knowledge, that is, the legendary RKO horror cycle produced by Val Lewton famous for suggesting its terrible subjects rather than showing them, both out of aesthetic conviction and budget considerations. These films, which were produced in the shadow of Citizen Kane and which bear its mark, at the very least visually, are also famous for spawning such talents as directors Jacques Tourneur, Robert Wise and Mark Robson.

Judging by the first I've seen, I Walked With A Zombie (1943), they are going to be hard to judge as horror films. This film was unable to raise the mildest apprehension in me. It was very pretty to look at, has one creepy looking dude, Darby Jones, pictured here and dialogue that is less stupid than in most 1940s horror movies. But it really seems to be a romantic melodrama about an ill-fated triangle with a somewhat morbid ending. I found the out-and-out soap opera Leave Her To Heaven way more scary. I could understand the cult following if the film was no longer effective as horror, but had some other remarkable elements to recommend it, but to my mind it really doesn't. It exudes a pleasant competence and literacy--but if we're talking about great "B" pictures, the most routine film noir holds up far better.

I will withhold judgment on the Lewton cycle until I've seen a few more, but this was not a promising start.
Posted by Lockhart at 5:41 PM