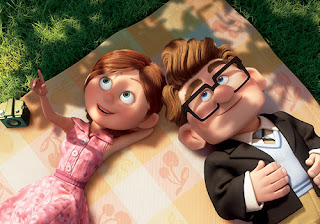 As a film teacher, I want to celebrate the continuing success of Pixar as a re-assertion of the primacy of pure cinema in popular narrative. Wall-E (2008) was functionally a silent film for 35 or 40 minutes, without a peep of complaint from its rapt audiences. An audience that enjoyed Wall-E is completely ready for The Kid or City Lights.

Up (2009) features a couple of the most touching sequences in the history of animated film (and more affecting than most live action in the last few years), all told entirely by pictorial means. This time, the images were either still images or so brief as to be still images for all practical purposes. Yet the narrative, and the emotion underlying that narrative was utterly clear.

It is heartening, when one reads some of the things written 25 or 30 years ago about the dismal future of animation. In those days, imited animation was becoming more and more limited. In those days, leading to what was called "illustrated radio" as TV cartoon shows had less and less action and more and more (banal) chatter. It has been thrilling to see how new technologies have revitalized old values in storytelling.

In the case of Up I can't remember an animated cartoon since Bambi for which more people talked about how they cried than how they laughed.

Parting shot--I still find that Pixar leans on melodramatic story devices (e.g., the cartoonish villain in Up) to sustain their stories past the one-hour mark. I look for the day when they will be able to discard such crutches, and build stories entirely on character.
Posted by Lockhart at 11:34 AM