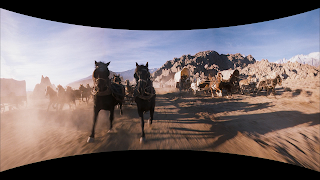 Back in the 1980's, there was a vogue for TV commercials with funny-looking actors shot in extreme short focal length lenses. You use short lengths when you are trying to get the maximum width of the objects in front of you. You use long lengths when you are trying to capture detail on something far away. Long lenses flatten distance and virtually eliminate perspective. Short lenses are given to distortion when people or things move from side to side. In extreme cases, everything looks as though it were reflected in a doorknob.

I never saw How The West Was Won (1962) in true Cinerama. In fact, I probably saw it in a matted-down 35mm print in 1963 or 64, after the roadshow presentation was exhausted. The current DVD release is the first version of the film to try and present the entire image and give a sense of how it felt to have this image wrap around your peripheral vision. Above is what is being called a "smilebox" which uses forced perspective to give a sense of this.

The result is that the entire film, for all its breadth and scope--and it is a not-bad multi-generational Western epic--feels like one of those "doorknob" shot ads. The whole film is fraught with an air of artificiality which was less odd in 1962--all Hollywood films had a veneer of phoniness that we accepted as part of the form. But today it is impossible to imagine that anyone could conceive of a future in narrative film for a system which had an 800-pound camera with 3 27mm lenses in fixed relation to each other. Perhaps if the lenses and relative angles could have been adjusted, although lateral motion was virtually impossible.

Finally, How The West Was Won doesn't feel like the death of a format with possibilities, but like Dr. Johnson's dog: you are surprised it could have been done at all.

Besides, there's way too many Debbie Reynolds songs for a proper Western, with or without John Wayne!
Posted by Lockhart at 5:30 PM