One good shock can be enough 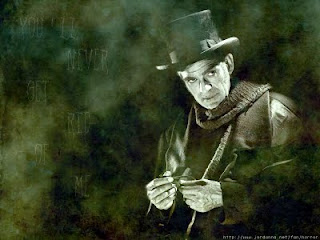 Judging horror from the 1940's is a tricky matter. I grew up on 1930's horror--old grave-haunting monsters and 1950's horror--new atomic monsters. But the 1940's were delicate, perhaps because the audience was living through real horror at the time. It was an era of benign ghosts, of angelic and other fantasy assistants helping people get through--perhaps a projection of the guardian angels the people who fought World War II were hoping for--either to guide them in difficult times or to bring the comfort of time with a departed loved one.

This was not the time to be gruesome, and so the horror films of the era (other than Universal's endless monster re-matches) tend toward the wispy and fey. Shadows, footsteps, windgusts--these are the stuff of 40's horror, especially as exemplified by RKO producer Val Lewton.

Reportedly, RKO executives pressured Lewton to use Boris Karloff in order to push him toward more conventional horror. In an act of artistic jiu-jitsu, Lewton did indeed use Karloff; he used the actor better than he had ever been used before (or since)--as an actor careful of subtle and darkly humorous effects. Freed of the monster make-up, he is a literally barefaced scoundrel in these films.

True to their nature, there are not a lot of shocks in The Body Snatcher (1945) by modern standards. There's an interesting character study by Henry Daniell, who usually was confined to playing sneering snobbish villains, but here plays the protagonist. Karloff has a lot of fun skulking around and even killing Bela Lugosi (again). But the one sequence that is likely to grab an audience even today comes within the last three minutes of the film. Daniell, an early 19th century anatomist who needs cadavers for teaching purposes has murdered Karloff and assumed his body-snatching duties. As he races his phaeton through a howling storm, bearing the body of an old woman he has taken for his students, his guilty mind conjures up the corpse of Karloff, literally white as a ghost, clutching him in a hideous embrace from behind as Daniell lashes his horses furiously. I am not worried that my description will spoil the shock of this moment--I have been reading descriptions of this scene since my high school days and never seen it until now. Here's a good scare that still holds up.
Posted by Lockhart at 9:34 AM