The Sound of their Own Voices 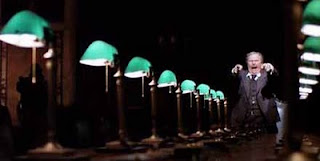 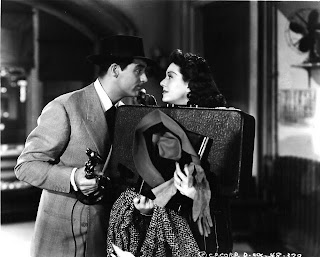 Watching Network (1976) and His Girl Friday (1940) in immediate succession as part of our Film Studies unit on screenplays (specifically, dialogue-driven screenplays) brought out some interesting parallels and contrasts. Both concern the control of information and its use in seduction. The seductions themselves, however, differ Network's seduction is partly that of good old Max Schumacher, William Holden's mostly straight-arrow point-of-view character that today nobody cares about. William Holden has faded as a screen personality, despite his anchoring important films such as Sunset Boulevard and Bridge on the River Kwai. That's the problem--he anchors them, but doesn't drive them. That's up to crazy nuts like Norma Desmond, Colonel Nicholson and in Network, Howard Beale and Arthur Jensen. Yes, there's a crazy woman and she has mixed her obsession with words and numbers with her failure of a sex life, but that seems to be there to be dismissed. The ultimate seduction is of Howard Beale by Arthur Jensen, a liebestod that precipitates Beale's death. And director Sidney Lumet has said that the film itself becomes corrupted, from a straight-forward recorder of events at the outset to a stylish glamorizer at the end. Nobody cares what the news is in Network. They're just interested in what it does for them; therein, the common bond with His Girl Friday, where the battle for eyeballs is just an instrument in Walter Burns's endless seduction. This was always true in HGF's source material, The Front Page, in which Hildy was a man. But the seduction was clearer and more palatable when it was made into a conventional romance. And here also, the romance of words is probably a liebestod. At the end of the film it seems clear that Hildy will not have an actual life, but race from scoop to scoop in the effort to hold onto her man--and her eyes glitter at the prospect. Neither film has a music score--where would you put it? Although, I must admit that Network's super-pompous TV theme music (by Elliot Lawrence, a veteran arranger/conductor of big bands, Broadway pits and TV award shows) always makes me laugh aloud--it is so dead-on, not an ounce of exaggeration or mockery. But that is a grace note. Both films are finally about people who will, if allowed, talk themselves to death.
Posted by Lockhart at 8:46 AM