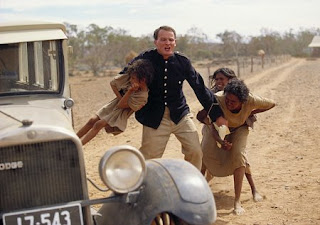 As horrendous as many aspects of the story told in
Rabbit Proof Fence (2002) are, it is comforting, as an American of Anglo-European origins, to be reminded that we are not the only people to senselessly abuse their indigenous populations. When I was a kid there was a show on Saturday at noon, when most of the network cartoon shows had ended called CBS Children's Film Festival. It showed films like The Red Balloon showing children's adventures from all over the world. Once you got over the strangeness of these other cultures--which is always hard for us parochial Americans, especially as children--it was fun and interesting to see our commonality as kid-type humans. Rabbit Proof Fence (which is rated PG) would be an ideal candidate for such a festival. It is a child's adventure from the child's point of view--the difference is the terrible stakes involved, namely, the integrity of the family versus social concepts of race. A government obsessed with marginalizing people of mixed race and encouraging breeding that will lead children to be identified as wholly aboriginal or wholly white adopts the policy of kidnapping mixed-race children from their families and training them for domestic service to white families. Our principal characters, three plucky sisters, escape from their school and follow the rabbit-proof fence across the near-lunar landscape of the outback to find home and their mother. As one might expect, it is based on a true story, punctuated by footage of the actual people depicted in the story (with much the same startling effect as in The Blind Side, discussed below). Children, especially American children would benefit much from seeing this story. The filmmaking is mostly self-effacing, other than some canted angles in the scenes with the administrator of the program, played in an appropriately bloodless manner by Kenneth Branagh. Director Phillip Noyce has an interesting trick of moving the camera in a lateral or oblique fashion in ordinary dialogues scenes as if something strange or terrifying was about to be revealed, although no such thing is. It lends an air of restlessness to a film which is almost entirely on the run.
Posted by Lockhart at 8:31 AM