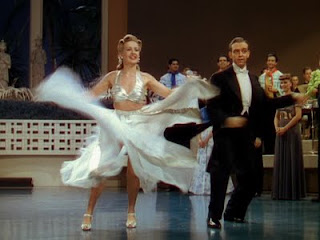 As part of my ongoing effort to fill in the gaps in my knowledge of film history, I am trying to catch up on those Other Hollywood Musicals. The MGM canon is well-known from frequent tributes and scholarly appreciations. But few of those films were as popular in their own time as the innumerable Technicolor hoof-a-paloozas at 20th Century Fox, usually anchored around Alice Faye or Betty Grable; or in a later decade, around the splendid tonsils of Doris Day at Warner Bros. These are what most people of the 40s thought of as movie musicals, more than the arty Broadway-style epics with Gene Kelly and the other denizens of the "Freed Unit."

This week I looked at an example that was reportedly a major effort, taking a year to prepare. This is hard to imagine. The result is a silly, lazy romantic comedy, which, like many Depression and post-Depression romantic comedies is not about romance, but money. But the movie can't even take the trouble to stay interested in its own story. I was watching with a person of the generation for whom these films were made and even she thought the story was boring.

Conversely, there are a number of well-written and performed songs and dances which HAVE NOTHING TO DO WITH ANYTHING. It's common today to say, "Oh well, that's the way musicals are (or were)." But personally I can't imagine having such contempt for an audience as to starve them of narrative, first by giving them a lousy and indifferent story, and then constantly interrupting that narrative with irrelevant performance pieces which become, in this context, irritating rather than exhilarating. The best one could hope for these songs and dances is that they would distract from the bad film surrounding them.

In retrospect it seems amazing how long it took the creators of musicals to realize that audiences crave narrative--even thin narrative. The much-vaunted Oklahoma has a story of pure tissue paper, but the show seemed revolutionary, because THEY NEVER STOPPED TELLING THE STORY. Evidently the generation raised on the last gasp of vaudeville still retained such a fascination with pure performance skills that these skills were thought to be in tension with narrative--after all, they had originally simply been disembodied performances. "Integration" was the big buzzword of the 1940s after Rodgers and Hammerstein emerged--simply meaning--stick with the story, stupid.

We see this today in martial arts films. Martial arts films are very much like musicals. You have some scrap of a story cobbled together in order to hold together the big entertainment pieces. in musicals, it's dances--in martial arts films, it's fights. (Both have choreographers, incidentally, showing the premium film puts on the action of the human body.) In the 1970s, martial arts films all had the same (revenge) plots and the same endless fights and--even more cliched--the endless training sequences. I contend that Jackie Chan broke through as the greatest superstar in martial arts ever for two reasons, (a) he brought humility and humor to the genre and (b) the martial arts were always in service to the story. He may someday be equalled (I'd have to see that), but he will never be surpassed as his type of filmmaker.

Other than as an historical curiosity, or interest in Betty Grable, who was such a good actress that she made it seem as though having great legs meant she had a pretty face (she didn't), I have no idea what the continuing value of Moon Over Miami is. Film preservation--the argument against.
Posted by Lockhart at 6:25 PM