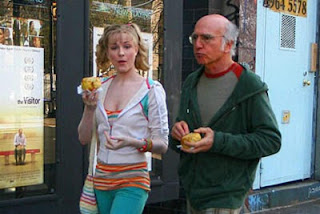 I have been following Woody Allen's movies the past few years out of respect for past accomplishments such as Crimes and Misdemeanors, Bullets Over Broadway and Broadway Danny Rose. The last few years his works have been given over to melodrama and expressionism recycled from other authors, decorated with flat fustian dialogue as if the characters were simply mouthing their own subtexts: "No, I cannot love you because I am incapable of feeling love due to my rejection from my mother. Moreover, I have developed a sociopathic distance from the rest of humankind which makes it possible I will murder you for financial gain." Nobody said anything interesting, or did anything which hadn't appeared in a thousand better books and movies.

Whatever Works (2009) doesn't break much new ground, even for Woody Allen. But it does work, for the first time since Small Time Crooks in 2000, which in turn was the first compeltely effective Woody Allen film since Mighty Aphrodite in 1995. One of his problems is his difficulty in replacing himself as leading actor. This time around, Larry David is perfect. Without aping Allen, as Kenneth Branagh unnervingly did in Celebrity and Jason Biggs did ineptly in Anything Else, David delivers Allen's ruminations and wisecracks in perfect comfort. David, as one might expect from the character he has created for himself, is able to be much more spikey and difficult than the "Woody" character. And on the other hand, he is able to speak the philosophical benedictions without apology and hesitation, giving them weight, but not more than they can bear. The whole film feels Shakespearean, given the re-matching of a large cluster of mismatched lovers and a character with a broader point of view than his own particular circumstances.

Evan Rachel Wood proves to be a far better interpreter of Allen than Scarlett Johannsen who was self-conscious and precious in her two outings with Woody. It's been very rewarding to watch Miss Wood grow up onscreen since the TV series Once and Again. She continues to make interesting and astute choices of projects and collaborators.

There are also some wisecracks that harken back to Allen's early 70's golden period, most notably, "I see death by culture shock." Doesn't sound like much--but in context, it's a solid homer.

Allen is revisiting the "smart older man with seemingly dumb young girl" trope that began with Manhattan and continued in Mighty Aphrodite, Curse of the Jade Scorpion, Scoop and in the documentary Wild Man Blues, with his real-life consort, Soon-Yi Previn. Allen's script even mentions and deflects reference to Shaw's Pygmalion. But it all develops in more interesting and plausible ways. And without rejecting his bleak interpretation of the nature of life, the film's conclusion, which is embraced in its title, offers the only hope possible in this sphere.
Posted by Lockhart at 3:41 PM