"Fine" means "end" in Italian. Did you know that? 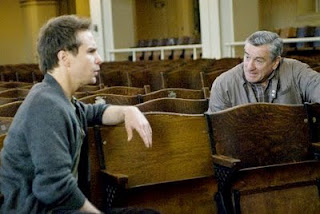 If, like me, you've seen the ads and trailers for Everybody's Fine (2009), you may think you know what it's going to be like. It's not like that.
I was expecting a touch of About Schmidt and a bit of Harry and Tonto. Widowed father, being pushed aside, misunderstood, learning to be sensitive to this children in his gruff, but loveable way. What is remarkable about this film is the way it manages to steer away from cliché. And that goes straight down to Robert DeNiro's acting, which was threatening, with films such as Analyze This and Meet the Fockers to degenerate entirely into Jack Nicholson-style reflexive vaudeville. DeNiro manages to inhabit the screen without the usual feeling of threat and danger. His character rides his children and worries for them, but without projecting his own ambitions on them. And he is a man without anger. DeNiro plays a man without anger, without recrimination.

And my wife and my daughter and I all cried at the same place in the movie. It was without words, no big hugs, no facial close-ups. It was extremely crafty. DeNiro's character is a blue-collar fellow who has raised all creative people. He spent his working life coating telephone wire. At first you think it simply labels him as a working man, and it is handy because he can look at the telephone wire as he rides the train. The director and editor can even lay in the sound of phone calls over the traveling shots of the wire to bridge sequences.

But the wire is a true visual metaphor for the connections that DeNiro's character's wife once provided and now DeNiro himself needs to make with his family. And that metaphor comes up and whacks you in the face when you're not expecting it, and damn you, Kirk Jones (writer-director), you made me cry.

Also there's some...what, surrealism? expressionism? Anyway, past and present blend in a way that seems gimmicky at first but is at last eloquent, and while I don't usually worry about spoilers, I think you should experience it yourself. To use an adjective that my son once used about a work of mine, it's satisfying.