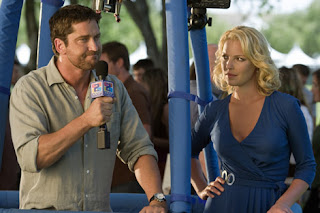 As I've written before, and am likely to write again as long as my wife continues to want to watch them, romantic comedies are not written or produced; they are engineered. They are highly artificial constructs which have little contact with human life as actually lived, but run along in parallel with our experience, perhaps as a detached, fantastical comment upon on it. There is a comedy to be made about a person who actually subscribes to these things as a guide to living. That might be what they started with when The Ugly Truth (2009) was first conceived. Certainly the idea of what we used to call in the 70's a male chauvinist coaching a romantically challenged woman on what a man expects from a woman is reasonably promising in this farcical universe called romantic comedy. The seeds of what will go right and wrong are pretty clearly established within such a strong idea. But the film shows signs of suffering in post-production. Ideas are established and abandoned. Gerard Butler's character wobbles from being a complete pig on television to a decent guy with his nephew to a decent, but piggish pragmatist in his interactions with the Catherine Heigl character. (By the way, we are supposed to believe that Catherine Heigl has trouble getting men!) Set-ups have no payoff and punchlines lack set-ups. In a social-aesthetic breakthrough, three female screenwriters demonstrate that they can compete in the raunch-stakes. It all feels erratic and careless, and therefore the final result is annoying when it should be satisfying. Director Robert Luketic's resume includes Legally Blonde, Monster-in-Law, With a Date with Tad Hamilton and 21. He must be stopped.
Posted by Lockhart at 9:10 AM