Come and be lonely with me 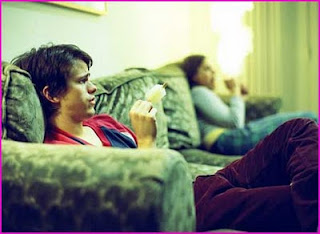 There are a number of ways that you can tell Good Dick (2008) is not a romantic comedy, even though it shares the same subject matter--unlikely people getting together against the odds. They don't meet cute. The male responds by stalking the girl. Both are to some extent desperate and at the end of their ropes. And they are brought together, ironically, over the practice of what our forebears called the solitary vice.

This is one of those films that seems determined to prove that it can't work, continually putting obstacles in its own way and boxing itself in. The writer-director is lead actress Marianne Palka and, without trying to be sexist about it, I wonder if a man would have designed a film that is nearly as agoraphobic as its protagonist. Note to filmmakers--video stores are officially used up as nexuses of romantic engagement. We have had bookstores, music stores (and the resulting mix-tapes), concerts, operas and now video stores as courtship sites. Time to scout out new territory. Starbucks?

The other element that struck me most forcibly is the film's reticence, which seems almost male. Palka does a nice job of presenting her character as is, without back story or explanation, but for one lapse, a brief meeting with a father (played by an unbilled Tom Arnold) who may have been abusive. The film skates toward providing what Paddy Chayefsky called a rubber ducky, then manages to avoid it. What makes this persistent silence work is the overlay of music. I cannot imagine this film cut together without music. It would have been interminable. But the music could not be conventional film underscore. Instead there is a thrumming pop-electronic bed which binds together scenes that would have been just scraps. A good example of film doing what it should, show, not tell.
Posted by Lockhart at 6:10 PM