I sing to drown out the noise in my head 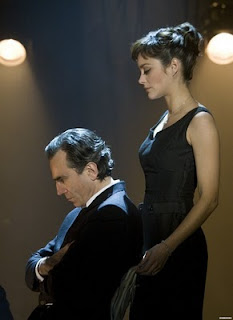 Both Fellini's 8-1/2 and the stage musical Nine were kitchen-sink sort of affairs. Everything was tossed in and, to some extent, left to the audience to sort out. Film musicals attempting that approach usually flounder. A strong spine must be found to hold together a naturally disparate and chaotic form. The play of Nine has been ruthlessly pared down to Guido's spiritual crisis. Lovers of the stage musical, which include me, miss some marvelous music.

The original stage production featured no men other than Guido--this was a conceit by the director, Tommy Tune, when he realized that he had an abundance of women auditioning for whom there were no roles. Opting for a lean narrative, both the mistress and the wife in the film are increased in importance relative to the many other women in Guido's life. This has good and bad points. Penelope Cruz is marvelous, but there is too much of her rather dull character. On the other hand, Marion Cotillard is spectacular in an improved role. In a way, it is her through-line as a character that holds the film together rather than Guido's anguish, which is insufficiently varied throughout.

[Although this remark doesn't fit the rest of my analytic framework, I have to say that the reworking of the character of the bombastic producer Liliane, who becomes the costume designer Lily in the film is a fine bit of adaptation. The character makes more sense and she gives Guido a sane woman to talk to. Not to mention the chance for Dame Judi Dench, who was the original Sally Bowles in Cabaret on the London stage, to strut her stuff.]

The film adheres to the modern conceit, first announced in Rob Marshall's earlier adaptation of Chicago that audiences cannot accept song as a substitute for speech in everyday situations. Therefore, all song must be placed in either an straight-forward performance context or an interior fantasy, or, as in the Marshall films, as both. It does make the numbers work, but in the case of Nine, it is hard to understand why film director Guido slips into fantasies that look like stage presentations on the same theatrical set. Is it impossible to conceive of a thoroughly cinematic treatment of musical numbers anymore? (This did not seem to trouble Gene Kelly, Stanley Donen and a number of other Golden Age directors.) It is hard to tell if this is compensating for poverty of imagination or poverty of budget--maybe there was no money left after all the movie stars were paid?
Posted by Lockhart at 10:35 AM