Crime does not pay off 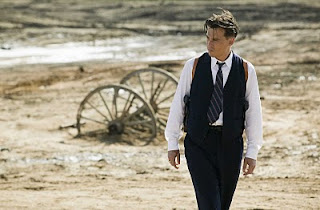 The reason people are still looking at those gangster movies of the 1930's such as Public Enemy and Little Caesar and Scarface, despite the primitive qualities of the early talkies, is the sheer joy and brio brought to them by James Cagney, Edward G. Robinson, Paul Muni and all those other exciting gangster actors of the era. Yes, of course the cops (or rival gangsters) were going to gun them down in a hail of bullets, but they would go down swinging, or laughing or in some way expressing the excitement of living outside the land of decent, law-abiding people. We could enjoy such a feeling in all its full-throated glory and then go back to our jobs or schoolwork or taking care of our families relishing the frisson of watching unrepentant evil.

But in Public Enemies (2009), not only doesn't crime pay, it doesn't pay off, at least in terms of fun. It's bad enough for us regular people to hate our jobs (I don't, but I have in the past), but this film's John Dillinger, as portrayed by Johnny Depp treats bank robbery as the worst sort of mindless drudgery. I don't know why the poor fellow should have to go through this sort of thing.

Michael Mann is a director of surfaces. When those surfaces are exciting, as in Miami Vice (the television show, not the film) and Thief, the film is exciting. Public Enemies is all gray. No one seems very interested in what they're doing, not Depp, not Christian Bale as the G-Man, not the cinematographer, not the composer. The whole film gives an impression of being dark grey.

You want to see a fun film about Dillinger, check out this B-picture from the 40's (requires Adobe Flash):