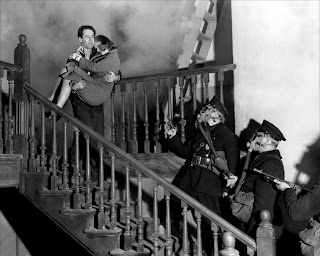 Film noir, like jazz, Broadway musicals and other examplars of the best of American culture comprises a fusion of two cultures. In this case, it's the meeting of the American hardboiled fiction genre, descended from Hemingway by way of Hammett and Chandler with European expressionist art, as typified by Lang, Murnau, Siodmak and others, with their moody low-key lighting and fatalistic view of life. The Long Night (1947) has re-surfaced as an example of little-known noir, but its flawed paternity explains why it falls short of full-blown noir. A remake of the French classic Le jour se leve (1939) which starred the inexhaustibly fascinating Jean Gabin, it lacks the hard crime element that marks the best American examples of the form. Without that "left handed form of human endeavor" (to quote The Asphalt Jungle) one is merely reworking themes from Les Miserables and other mid-19th century works calling out for social justice. Even with its steeltown setting, The Long Night feels European--the cramped, darked settings, the limited horizons of the characters, who feel trapped by their economic status, devoid of any vestige of the American dream. Workers think of themselves as just workers. Clearly, too much of the French script still clung to this project. There is a difference between thinking things are hopeless because you were born to the wrong family (European pessimism) and thinking things are hopeless because Fate (often in the person of a bad woman) has ganged up on you and stuck a thumb in your eye (the noir ethic). (Incidentally, Ann Dvorak turns up here as an example of the fun kind of noir woman, the wisecracking type who's no better than she should be. The film has a European frankness about what she and Henry Fonda have been doing in her room.)
Hungarian-born director Anatole Litvak made a number of dark, moody films, including Confessions of a Nazi Spy, Out of the Fog, Blues In The Night, Sorry Wrong Number and The Snake Pit. But while all of these films intersect the noir aesthetic, none truly qualify as noir. The film's strongest claim to noir credentials is the gorgeous photography by Sol Polito and the remarkable production design, which comprises some of the most remarkable studio-built exteriors, using detailed miniature work and multiple rear screen projections. But without that hard-boiled perspective, The Long Night must remain just outside the noir canon.
Posted by Lockhart at 8:29 AM