Comedy is hard; families are harder 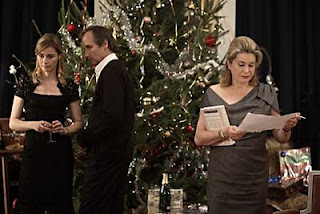 The difficult family reunion has become such a staple of filmmaking in the last twenty years it may be worthy of consideration as a genre of its own. The American version is generally served up with either melodrama or slapstick or both, plus a heart-warming ending.

Arnuad Desplechin's A Christmas Tale (2008) offers little comfort and joy for the season, other than the exhilaration of seeing an artist at work. The film is most reminiscent of Rachel Getting Married, with a death-haunted family of eccentrics, a tolerant father and chilly mother. But where the Anne Hathaway character made you afraid for what gaffe she would commit, Henri, the analogous substance-abusing screw-up character in Christmas Tale is more likely to inspire laughter, if laced with a bit of pity.

It's dry, like a quality sparkling wine; if you're sick of the sweet stuff, try this next Christmas--but probably after the day itself, as it may be a bit of a buzzkill. In the French manner, use of the medium is limited to mise-en-scene and the incomparable faces of the actors. Not much montage, suspense, irony, etc.; rather like filmed theater. But there's no drama like family. And as with chocolate, I like my comedy bittersweet. Better for your heart, they say.
Posted by Lockhart at 3:28 PM