Applause, but not laughter 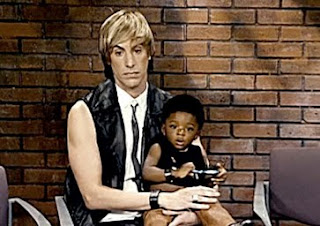 "I'm not a comedian. I'm Lenny Bruce." Perhaps the same should be said for Sacha Baron Cohen, whose film Brüno (2009) offers more social criticism than laughter. Unlike Paper Heart, which takes the rules of documentary and cheats on them, Cohen is fair and consistent. His characters are completely fabricated, but he proceeds to engineer real situations and have real people interact in them. His work is almost Candid Camera writ large.

Cohen has said that homophobia is the last acceptable prejudice. The film demonstrates that conclusively, most particularly in the finale in which an audience primed to see violence against gays becomes outraged and violent itself when presented with love and tenderness.

There is not much to be said about the craft or the aesthetics of this film. It is a document of its place and time. The problem today for me is that it didn't make me laugh. Bruno himself is the kind of brainless idiot character of the Adam Sandler-Will Ferrell variety that just falls flat for me. His terminal clueless narcissism is just depressing. It's like laughing at Down Syndrome children. Compounding this is Cohen's sad picture of a world in which parents will agree to liposuction for their small children in exchange for fame; in which charity is merely a tool for the attention-seeking; and in which one's sexual orientation can put one in fear of one's life.

Please forgive me if I find it bold, stunning, admirable, but not funny.
Posted by Lockhart at 11:38 AM