American Graffiti is so European! 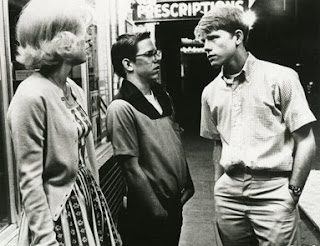 I cannot be objective about American Graffiti (1973). I saw it in the first September of my college career, and it hit me right where I love. I'm not sure, but I probably went back and saw it again that first week, and I've never stopped enjoying it. It's consistently characterized as wholesome all-American entertainment, especially since most people remember the film through the distorted lens of the TV series that ripped it off, Happy Days. But watching it with my young Film Studies class, I was reminded that the film is not really conventional American big-studio entertainment. Several students felt disappointed and a little confused by the film. "It has no point," said one of them. And it's true. The story is equally divided among a large group of protagonists, it is episodic, seemingly meandering. There is no clear goal for the characters--two of them have decided to leave town at the beginning of the story, and the only thing they want to do is have one last fling. The other characters are just hanging out. The conclusion offers one modest reversal, but certainly no major dramatic development as it is conventionally understood. I am certainly not the first person to note that the structure and the mood of the film recall Italian neo-realism and I Vitelloni (1953) in particular. That earl 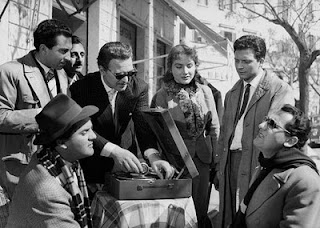 y Fellini masterpiece focuses on a group of friends, "idlers" as the title translates who aimlessly but with tremendous charm through a series of episodes. Not only do these wastrals lack clear dramatic goals, they don't even want to have them. It's an amusing comparison. A couple of other notes on Graffiti--I was very taken by Candy Clark's performance. She never condescends to or ridicules her somewhat ridiculous character, and even affords her some dignity and strength. The film was shot in Techniscope, which was called "a poor man's Cinemascope." Instead of using the entire 4:3 negative to squeeze in a 2:2.1 picture, the way the anamorphic processes do, Techniscope simply mattes the frame down, so that only have of the available space on the film negative is used, and thus blown up to a larger scale. The result is grainier and grittier and so I remembered Graffiti. But this time around, perhaps because of the DVD transfer or the nature of our projector, the film looked creamier and smoother than I remembered. Maybe we have just adjusted to higher grain as we see more independent and non-studio work. Finally, when the final images appear with those wonderfully realized faux-yearbook pictures with a description of the fate of the four male principals, my students were shocked that two of them died in a way that my generation was not. We regularly lost friends and fellow students to car accidents, disease and especially Vietnam in those days and it was good to be reminded that we should have been more shocked back in 1973 than we were.
Posted by Lockhart at 12:27 PM