The illusion of synchronized sound 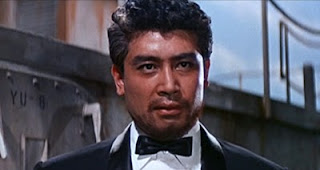 Watching What's Up Tiger Lily (1966) in Film Studies should remind us that everything we hear on the soundtrack of a film is contributing to an illusion--the illusion of continuous time and space. Virtually every American commercial film will have some dialogue replaced due either to technical or editorial considerations.

WUTL is just more honest about it. This is the film in which a producer hired Woody Allen to take a pre-existing Japanese-produced James Bond-type thriller, strip off the soundtrack and lay in a completely new one. The effect is similar to when you and your friends turn the sound off the TV and make up your own dialogue--provided your friends are really smart and funny.

I will not recite the jokes--you can read them elsewhere in the World Wide InterTubes and besides, you should just enjoy the movie on your own. But I am always struck by one of the smartest and most insightful jokes, which is itself both a comment on the nature of English syntax and our understanding of symbolic language. At one point, a villain points to a small diagrammed floor plan of a rival's home and says, "This is Shepherd Wong's house." Hero Phil Moscowitz asks, perplexed, "He lives in that piece of paper?"

There are symbols upon symbols here. Not only has the first speaker elided words when he actually meant, "This is [a map of] Shepherd Wong's house;" but the map itself is an extremely abstract object, being a two-dimensional representation of the house--not even the house as it appears to a viewer, but a representation of an imaginary view of the house, as if the house were being viewed from above with the roof lifted off. Yet we can communicate easily without having to explain all those levels of abstraction.

Which is appropriate for a medium which requires that you take a group of two-dimensional images and electronically recorded sounds, all registered at different times and places, observe them when they have been placed in proximity of each other, and interpret them as events which bear some relationship to reality as we experience it. Which is weird, right?