You lied to me! 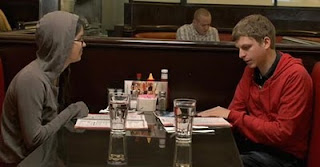 I hope we all accept the premise that art is not reality. Art is a method of ordering reality. Each art, and each art's sub-sets have rules, which we call conventions so that the audience can draw the parallels between the art and actual experience. We make diagonal lines on a flat surface to indicate the perception that things seem to recede in a three dimensional world.

Film developed a grammar and a syntax slowly and painstakingly from 1896 to about 1915. Since then there have been tweaks and changes--the fade, cross-fade and wipe have nearly become extinct--but the essential grammar remains in place. Then there were lesser rules--complete fades meant long passage of time, crossfades were shorter. You could not lie in a flashback. Actions in consecutive shots could be interpreted as being connected as cause and effect.

And documentaries were constructed of unstaged action assembled to tell a narrative or make a point; but inherently they were devoid of the inherented conventions of theater which shadow most of our filmmaking today, from the three-act structure, to exchanges of dialogue with pre-planned rising states of tension. Yes, we've had the mockumentary format, but at least that was nearly entirely fake. Known actors assumed fictional identities. Plot lines are clearly prepared and carried out. Films such as This Is Spinal Tap and A Mighty Wind merely ape the casual, unplanned bits of human life that documentaries catch in front of their lenses, but they are unabashedly fictitious.

But Paper Heart (2009) thumbs its nose at the rules and conventions. It mixes genuine documentary with improvised drama/comedy in which the actors use their real names so as to confuse us. In one case the real name of the director is assigned to a character played by an actor, a fact which we are not privy to until the final credits, deliberately deceiving us that this person before our eyes is the credited director. The real documentary bits take the form of charming interviews with real people talking about love, sometimes illustrated by star Charlyne Yi's crude wire-and-paper puppets in crude real-time animation--thus abstracting the bits of actual reality the film does contain. Intermingled with that is a cooked-up phony romance between characters called Charlyne Yi and Michael Cera, played by Charlyne Yi and Michael Cera, respectively.

Frankly, for all its charm, the film lies and cheats up and down six ways from Sunday and my final reaction to the film was simply mistrust, a mistrust I believe I contracted from the film's creators who clearly don't trust the audience enough to tell them what they're doing.

This film's use of Michael Cera establishes that he is no longer a mere actor who can be hired to interpret a role in a script, but a thing, an entity apart from the film you are seeing which survives from project to project, wrapped in its own cluster of meanings and its own history. Pretty amazing for a guy in his early 20's.
Posted by Lockhart at 11:14 AM