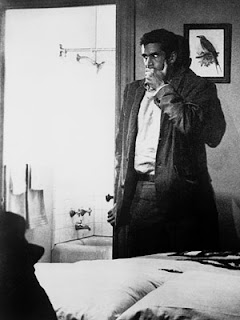 We've just watched Psycho (1960) in film class, primarily to reflect on how the brilliant underscore by Bernard Herrmann is so critical to the effect of the film.

One thing struck me even more forcibly about the film this time around (I've seen it literally dozens of times). By now, everyone must know that the nominal star, Janet Leigh, is killed one-third of the way through the movie. It is hard to overstate how shocking that was to the 1960 audience; not because of the violence of the movie, but because the removal of the star left the audience without a character with which to identify as it moved through the narrative. This was considered completely indispensable in the classical Hollywood cinema. Now that the protagonist is dead, who is the protagonist?

As we now know, it will become Norman Bates--which is outrageous in and of itself, as Norman becomes both hero and villain. But Hitchcock has knocked away the moral substructure of classical Hollywood, and severed the link between "good" and hero, between "bad" and villain. He attempted this twice before, in The Lodger and in Suspicion but in both cases, the films had to tell the audience "just kidding"--the hero really can't be the killer, especially if he's Cary Grant.

But Norman Bates is hero, villain and victim all rolled into one. And the scene that clinches it begins right after the still I've put at the top of this post. It is the famous clean-up scene. What's remarkable is not just that it's in the film at all; a film from an earlier generation might have shown the beginning of the clean-up followed by a fade-out to the finished job. It's not just that the scene has no underscore, showing that Hitchcock is not worried about the audience being bored. But what does the scene consist of? A man cleaning a bathroom. (I know a lot of wives who consider such an idea worthy only of a fantasy.) That's it. Just a guy cleaning a bathroom. But next time you watch it, note the sheer detail of the scene. We linger on every thing that could give away the murder. We start to mentally urge Norman on: "Don't forget that little corner; be sure and wash the sink; don't forget to look over there..." Our anxiety grows and grows for fear that Norman will leave a telltale trace.

And, as many have remarked before, the telltale clincher is the moment the audience holds its breath when the car pauses in its descent into the swamp. When that descent resumes, you can literally hear a collective exhalation and relaxation. The process is complete, we have accepted a new hero with which to identify, and he is an insane serial killer. None of this would have been possible if Hitchcock hadn't been willing to take the time to delineate the details of the cover-up of the murder in deliberate, unhurried detail.

Speaking of details, I noted that the cinematographer of Psycho has no other major credits. His career existed almost entirely in television, and the success of Psycho did not bump him into the major leagues. In fact, Hitchcock's filmography includes very few well-known or star cinematographers--no John Altons or Gregg Tolands are to be found. Moreover, he does not repeat photographers from film to film. Whereas, he used screenwriters, composers, and most especially editor George Tomasini in film after film, he was completely fickle when it came to photographers. Is it that Hitchcock didn't want to hack the competition, or that his visual ideas were so certain he only wanted an uncreative craftsman to execute those ideas?
Posted by Lockhart at 2:17 PM