Was this trip necessary? 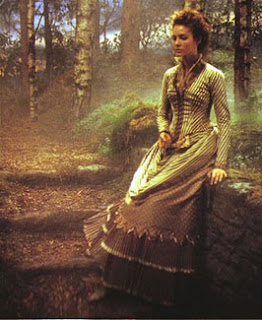 A month or two back, I wrote about the 1950 Swedish film adaptation, directed by Alf Sjoberg, of the Strindberg play Miss Julie. That film offered interesting issues about the adaptation of theater works to film.

The 1999 Mike Figgis filming of Miss Julie pretends those issues don't exist. Evidently it was based on a prior stage production with a different cast but substantially the same text. The picture above demonstrates the degree to which the piece has been "opened up" -- a small wooded area just outside the country estate's kitchen which is the sole setting of the play. Otherwise it is a fairly unvarnished stage production shot on grainy and dully-lit Super 16 film.

The problem is, other than one of those fake sex scenes you see in dramatic films (where everyone reaches up under their clothes and the man never takes a stitch off), washed-out color and the face of Saffron Burrows (which is admittedly a cinematic event in and of itself), this film offers nothing not already present or at least implicit in the earlier film. Sjoberg has even gone farther, physically representing characters who are only spoken of in the play. Moreover, the Figgis version embraces that horrible English stage convention that lower-class characters can be represented by use of a Scots or Irish accent, while maintaining the original Swedish setting. I know, I'm supposed to hear the Glaswegian accent and know that this fellow is working class, but I can't help wondering why this guy (played by Peter Mullan) wandered away from Sauchiehall Street to get a job as a footman on a Swedish estate.

The film is such a literal rendering that when the footman sends Miss Julie upstairs to get money, we never see her do it. She just goes away and comes back with money. It would have made more sense if this film had been made first and Sjoberg's more cinematic adaptation had followed. As it is, I have no idea why this film was made at all.