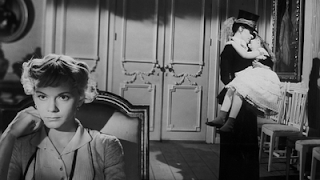 Odd, considering how long I've been involved with theater, that I have never seen Strindberg's Miss Julie on stage. So my first encounter with this landmark play is by way of the landmark film Fröken Julie (1951), adapted and directed by Alf Sjöberg. This film is one of the prime examples of "opening up" a play, a process to which Alfred Hitchcock objected strenuously.
Whereas conventional Hollywood wisdomis that to film a play literally would be too static, lacking the variety of setting and situation one expects from the film medium. Hitchcock maintained that one of the chief virtues of a play was the effort which the author had expended in compressing the events into a single location and span of time. By opening up the play, that is varying the locations and breaking up the timeline, Hitchcock asserted that the adapter dissipated the energy of the work. He observed those strictures in his films of Rope and Dial M For Murder in particular.

Sjöberg clearly had no such qualms. The play is comprised of three characters confined to a single setting, the kitchen of a baronial estate. As if to mark the fingerprints of the sister medium, that setting in the film is theatrically over-lit. But the rest of the film is far more interesting. The dreams, fantasies and recollections by the two principal characters are shown to us, blow-by-blow. I have not seen the straightforward 1999 filming by Mike Figgis, but it is hard to imagine how these lengthy monologues could be made cinematic. Sjöberg, on the other hand, roams freely about to show these scenes, and they give the film an expressionistic panache that allows oxygen into the story.

Oddly, one of the most effective devices is the presentation of multiple planes in time in a single plane of space. An example is seen above--Julie remembers her mother carrying her as we see the two figures pass behind her. In a moment, their paths will cross with that of her fiancee, years later (but years earlier than Julie's present recollection) presenting her with the gift of a caged bird. When used in an American Film Theater or other "canned theater" production, it seems phony, a clumsy use of a theater device in an alien medium. Somehow, in Miss Julie it seems both daring and graceful. Odd.

But with all this oxygen permitted in, one wonders how far Sjöberg has strayed from Strindberg's concept. Clearly, Strindberg wanted to box Julie into tighter and tighter spaces, given the limited choices available to her and the foreclosure of those choices made by her own neurosis and poor judgment.

So, by the rules of adaptation, is this a good film because it brings the story alive in a way a literal rendering might not? Or is it a bad adaptation because it has played so freely with elemental aspects of the author's conception?