It's all in the hands, my boy 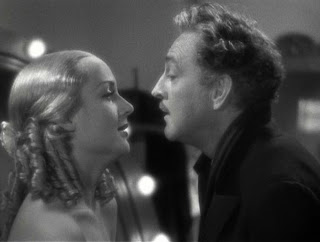 Viewed the Howard Hawks pre-screwball comedy Twentieth Century (1934) for the sake of John Barrymore's performance to establish a baseline of pre-motion picture stage acting. It is pretty safe to say that while Barrymore had a bit of a silent movie career, by the time talkies came in, he knew he could revert to his old stage ham techniques.

So what are those techniques? Well, for one, he moves to quickly. His eyes pop open and suddenly squint at a rapid pace. His eyebrows seem to be engaging in some sort of race from the ridge of his nose up to his hairline and back again. But most of all there's those hands. They may have been graceful and expressive on stage, but on film they resemble the kind of "sawing the air" that Hamlet complained about.

Of course, he's terribly enjoyable in this film, but because the film uses him as a representative of his bygone generation, and challenges him to exhibit his techniques in the most ridiculous light. Here, he's in on the joke. Later in his career, he seemed to become the joke.

My students noted that Carol Lombard's voice is very high and squeaky and difficult to understand. That remained a problem with her at least through My Man Godfrey (1936), but I can't recall any such difficulty in To Be Or Not To Be (1942). Maybe life with Clark Gable lowered a woman's voice...
Posted by Lockhart at 1:02 PM