Sleeper in a motel 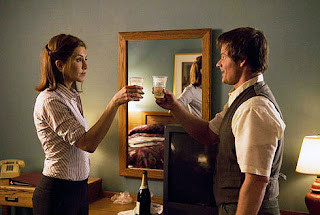 It was about time Steve Zahn graduated from goofy-sidekick-in-overdone-action-film, becoming an offbeat leading man in Management (2008).

Jennifer Aniston is to be commended for helping this movie get on. (She is credited as an executive producer, which I presume she received in exchange for lending her name recognition to a project which showcases her co-star, almost to her detriment.)

I do want to caution you, knowledgeable filmgoer: you think you have seen this film before, but I don't think you have. For one thing, the one who seems the most awkward and socially inept winds up teaching the other one how to relate to people and how to have a relationship.

Writer-director Stephen Belber has worked mostly in theater, which seems to have taught him to dodge the cliches. You'll guess what Woody Harrleson's aggressive character is likely to do, and you'll be wrong. You'll guess how Aniston's character will react to Zahn's persistence, and you'll be somewhat right but mostly wrong. And I think you'll be surprised at how touched you are at the end. A romantic comedy for people who dislike romcoms.
Posted by Lockhart at 4:37 PM