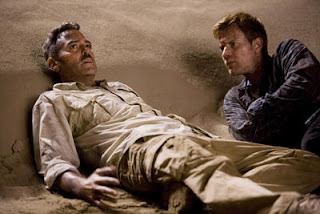 The Men Who Stare at Goats (2009) can boast a rare accomplishment in film. It made me laugh aloud. I watch a lot of comedy, and I worship at the altar of Keaton, Lloyd, Laurel & Hardy, W.C. Fields and the Marx Bros. On the other hand, I can sit stony faced through any number of Will Farrell, Adam Sandler or Jim Carrey films. (Actually, most of those are likely to darken my mood, as they are such feeble excuses for humor.) But TMWSAG trades in a type of humor that I thought had vanished with the early 1980s. I can best describe it as political-metaphysical slapstick wrapped in a shaggy dog story. It was good to see it back. It mixes loopiness with straight-down-the-middle gags in a way that I thought Peter Sellers had taken with him when he died. (Doctor Strangelove is the greatest example of this type of film, and one of my candidates for Top 5 all-time films.)

But what struck me in thinking about how this nice little movie got made (although it has four major movie stars, it was released not by a major, or the independent division of a major, but by Overture Films) is the degree to which George Clooney has built his career on edgy politically-oriented films. Well, edgy for a mainstream performer.

It began with the brilliant and dark Three Kings, which was a risk for everyone involved. Since then there's been Confessions of a Dangerous Mind (which has a certain rhyming quality with TMWSAG), Good Night and Good Luck, Syriana and Michael Clayton. These may not be radical calls for revolution, but this clearly is a man who is unafraid to say there is something wrong with our world.

I wish there were more like him, especially if they made funny movies.
Posted by Lockhart at 8:42 AM