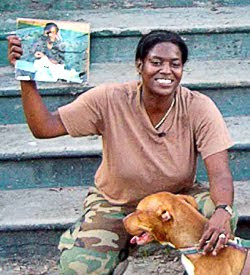 You probably think you've already seen Trouble The Water, a 2008 documentary inspired by the events of Hurricane Katrina. If not literally seen it before, you may feel, as I did, so surfeited by images of that catastrophe, as to have "Katrina fatigue."

Get over it. This is not a re-working of Spike Lee's When The Levees Broke. It does not provide a general survey of the events, nor does it dive into the politics, as Lee's lengthier film does. This sly film is about more serious business. It is nothing less than the spiritual journey of its protagonist, Kimberly Rivers Roberts (pictured here).

At the film's start, we see her sassy and confident, ready to document the big event to come, possibly as grist for her own creative mill, as she is an aspiring rapper. Then events overwhelm her and her family and then she and her husband Scott, who seems to be one notch above street hustler begin to accept responsibility for their own situation, and then, for others. Kimberly, who was just 24 at the story's beginning becomes the central figure in her family, and then begins to build a larger family around here, drawing in others in need. The end of the film does not offer a solution, but it does provide catharsis, as Scott learns to help others rebuild with the help of a willing employer, and Kimberly transforms her ordeal into the stuff of art, as we see her listening to the mix of her new rap.

We may weep for the New Orleans that will never return, but we rejoice for these two strong young people who have found their own strength in this formative experience.

I haven't said much about this from a filmmaking perspective--the film does integrate original footage, news footage and Kimberly's own Hi-8 material in a very wise way, using dry humor and sly irony instead of the sledgehammer polemics one might expect. It is perhaps the best edited documentary I have seen in several years (and documentaries are all about editing).
Posted by Lockhart at 4:15 PM