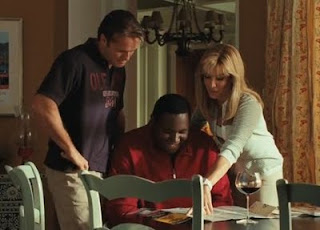 It is remarkable how a movie can give you almost exactly what you expect, with few if any surprises and still be completely delightful. So it is with The Blind Side (2009) a film of decent sentiment and a refreshing reticence that both mirrors the character's own proclivities and prevents the film from becoming bathetic or self-congratulatory.

There's this thing my sister does when a really good part of a movie is coming. You know, the part where Jimmy Stewart tells off the villain, or Harpo destroys the stuffed shirts or the con men trick the crooked bank president. She drums on her lap very rapidly, sometimes accompanying with a sotto voce "goody goody goody." I know exactly what she means. The anticipation of delight sometimes outweighs the moment of pleasure itself. And one doesn't have to have seen the film before to know when the good bit is coming. In The Blind Side, there is the moment when Michael returns to football practice after a stern but clarifying talk with his adoptive mother (played by Sandra Bullock). You know now he understands what he has to do. And in case we weren't sure, the film slows down and the music begins a low thrumming rhythm. And although nothing that follows is remotely surprising, it is oh, so satisfying, as Michael begins to demolish every tackler in sight.

The film has an odd shape and each of the three acts feels quite separate from each other. And I am sure people are going to comment that the only Black social or family life seen is broken or degenerate. Only individual black characters are allowed dignity or accomplishment--they apparently can't be trusted in groups. That problem may be built into the story, but I am surprised it does not seem to have been addressed by the filmmakers.

You'll see the term "tearjerker" tossed around in connection with this movie--people are bound to make comparisons with Remember The Titans and others of that ilk. But what is remarkable is the film's reluctance to jerk tears. Oh, they may come, but not due to any manipulation. Led by Ms. Bullock's extremely focused, detailed and disciplined performance, the film never begs, never pleads for its characters. It allows them to earn the emotional responses, just as Michael's true-life family and mentors made sure he earned his rewards. Well done.
Posted by Lockhart at 5:17 PM