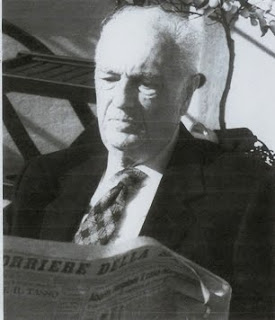 We think of Italians as the great romantics, but in the last 120 years they have fostered two important movements toward realism in art. One was the verismo movement in opera, which was intended to bring the lives of ordinary people onto the opera stage. Today, the greatest verismo operas (which are among the most popular operas in the repertory) La Boheme, Cavalliera Rusticana and Pagliacci seem highly romanticized to us, but they seemed like documentaries to their audiences in the 1890's.

Then from the terrible rubble of World War II, Italian neo-realism brought the reality of that existence onto the screen. Again, the films seemed terribly gritty, emphasized by the lack of movie stars and the downbeat endings. But to look at Bicycle Thieves today, which I did recently with my Film Studies class, one is struck by the deliberateness of the cinematography, the care of the staging and mise en scene and most emphatically by the beauty of the musical score by Alessandro Cicognini (pictured here). It is completely artificial, in the sense of being full of artifice, nothing like The Third Man's source music, but it perfectly expresses the inner life of the characters. And the idiom is not that of post-War concert music, but that of verismo opera.

I was disappointed to be unable to find a modern audio recording of it readily available in the US--I will keep looking--and very intriguted to learn that it was used as a temp track for some scenes during the editing of Star Wars: A New Hope. Next time you see Bicycle Thieves, see if you don't want to sing along with that gorgeous melody. Bravo Cicognini!