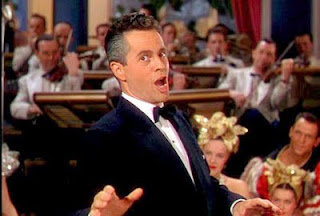 My friends and family would probably be surprised to learn there was any Hollywood musical I hadn't seen at some point. But somehow The Jolson Story (1946) has eluded me until now. I don't feel deprived.
I grew up in the tail end of the entertainment era one might term "Showbiz." Yes, I know there is still an entertainment business, but that's not what's meant by Showbiz. Showbiz is Variety using terms like "boffo." It's nostalgia about vaudeville and burlesque; it's ancient troupers hauling out their musty old routines on The Ed Sullivan Show. It's broken-down comics swapping old bits at the Carnegie Deli, or, earlier, the original Lindy's. It's Broadway when opening night was the same for the audience and critics and they were all in tuxedos. It's the disdain for art, and celebration of "anything for a laugh." At it's best, it was Jimmy Durante, an entertainer whose act was based entirely on projection of his personality. Durante had talent, but he never needed material, because he was his own material. Today, Liza Minelli represents the last ruined vestige of that world, by virtue of heritage and her own predilictions.
And Al Jolson was monarch of the lost kingdom of Showbiz, called the "World's Greatest Entertainer" and not just by himself. Walter Kerr, for my money the best theater writer of the 20th century confirmed that title. But to me, Jolson's charisma never translated to film. He just seems to be trying to hard.
So in that way, his film biography serves him well. It also tries too hard. It tries to peddle the following:
(a) Jolson was just a lovable brash guy, not a psychotic who hated for anyone else to get attention so much, that when he was in his dressing room and another performer was getting applause, he had to turn on the water so he couldn't hear it; a monster who drove one wife to drink and the other one away.
(b) There's nothing better than showbiz--all that medicine, politics, law, science, all other noble pursuits are just for people who can't cut it in showbiz.
(c) Jolson, like all other entertainers is surrounded by a small group of adoring friends and advisors, including his own worshipful parents.
(d) Jewish entertainers, indeed all ethnic entertainers, would be better off as white-bread Anglo-looking performers like Larry Parks, who plays the title role.
(e) Blackface is a harmless old category of entertainment which should NOT be discussed, just accepted, got it?
(f) Ruby Keeler, a sawed-off Irish woman who tap-danced like someone about to fall over, is actually named Julie Benson and can be believably portrayed by the lanky, graceful redhead Evelyn Keyes. (This one is particularly ridiculous--ALL of the audience in 1946 must have known Jolson was married to Keeler--she was a movie star in the 30's.)
(g) Musicals do not need plot, or indeed any narrative thrust. Audiences will accept any old swill as long as there is a familiar song every once in a while. I suppose it made sense to swipe the plot of Jolson's most famous vehicle, The Jazz Singer, as a structure for his life story--young man torn between cantorial singing and pop singing, but even this cheesy movie gives up on that tired old plotline after the first 40 minutes or so.
(h) The 40s look and feel just like the 20s, except some of the girls had funny hats.
(i) Oh yeah, Al Jolson discovered jazz. Personally, I cannot describe the relationship between Jolson and jazz. Maybe there was some playing in the same room where he was once. But syncopated pop music is not jazz, no matter what they thought back in 1922.
In short, this movie has almost nothing to do with the real facts or even the texture of its purported subject's life, and it reveals far more about mid-1940s America than it does about Jolson.
Posted by Lockhart at 9:01 AM