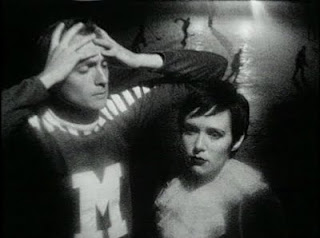 It is the hoariest old cliche that films are dreams. I don't know about you, but my dreams don't have neat three-act structures, perfectly scripted dialogue and elegant production design, like your typical Hollywood product. They're usually a chaotic collage of the flotsam found in my brain. Cowards Bend The Knee (2003) is the first movie I've ever seen that actually looks the way I think I dream (sometimes).

Let's be straight with this, though. It's not clear that Cowards (by cult filmmaker Guy Maddin) is even a movie. It began as an art installation, in ten peepshows, now manifested as chapters. The films are primarily monochrome, shot in out-of-focus silent, 8-millimeter, with a vague continuity and jump cuts and repetitions galore. You can search the internet to read about the plot, which was not comprehensible to me until I listened to the comment track, and which ultimately did not affect my opinion of the movie.

I used to like the fever dreams I had when I was a kid. They are some of the few dreams I can recall. I think I could even control or direct them. I remember that many parts were in grainy black-and-white (perhaps influenced by the cheap prints of Charlie Chaplin films that were shown incessantly on TV in my childhood), that the motion was jumpy and choppy and that many parts repeated and others were complete non sequiturs. Could Guy Maddin have gotten into my head? Not sure I want to see any of this other films, but I'm glad I saw this one. It was short, too (61 minutes).
Posted by Lockhart at 7:06 PM