All dressed up with no place to go 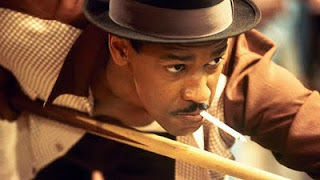 You know those detective stories which consist of telling the investigator to go somewhere and ask about such-and-such (even though neither you nor the character knows that means) and they go there and somebody tells him about this-and-that (which has no discernible connection to such-and-such) and then he goes to the other place where somebody beats him up for reasons which are never explained and then a character from the first sequence strolls in the door and throws the hero a towel and explains that...you know that kind of story?

You can pull that off if at last it is not only all explained, but it has some significance. Like in Chinatown where a small group of corrupt men run everything and you have to decide what you're going to do about it. Or in Detour or The Killers where you have to decide whether you resist your fate or go out and meet it. The point is, it's all about something.

Yeah, they skipped that part in this film. Denzel looks good in a fedora and he keeps going from place to place and picks up clues and beatings, and in the end...they find out whodunit. Like the episode of a TV show. Not like a film noir movie. Not even close.
Posted by Lockhart at 6:50 PM