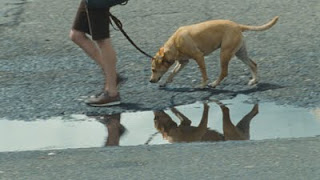 I want to take a moment to praise the brilliant Frozen River which I saw last year before I began this blog. This very low-budget independent film is a riveting character study of people living at or near the edge, driven by female characters and female creators behind the camera. Add it to your Netflix queue.

I want to say this so that no one will interpret my dismissal of Wendy and Lucy (2008) as an anti-feminist or anti-indie film screed. It's just that there seem to be a lot of reviews which suggest that if you make a film about a young woman with few or no resources and a loveable dog, you should love it. Make no mistake. This film could have been an Academy Award winner for Best Short Subject. It has enough story for 35 or 40 minutes. But at 75 minutes, it is riddled with excruciating shots of nothing much happening (an extra reading a book, an empty street) during which we are supposed to think about...I don't know, what the heck?

Nothing to see here, folks, keep moving.
Posted by Lockhart at 3:26 PM