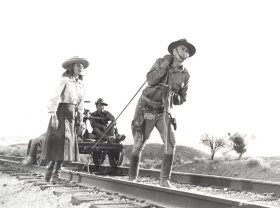 It is understandable that after an overwhelming and savage experience such as fighting the Second World War that people would need to explain to themselves what happened and how it happened. Those WWII tropes remained a major part of filmmaking right through the early 1970's, when our image of war began to be primarily shaped by the Vietnam experience.

It's easy to miss this when the film does not directly address war, such as in the semi-Western They Came To Cordura (1959). I say "semi-", because it is also a war film, set in the milieu of the Pancho Villa war of 1916. Based on what was probably a Very Important Novel with lots of Symbols, it aspires to meditate on the causes, consequences and nature of heroism. So many people did things in the war that would have been unthinkable in any other circumstance, heroic and unheroic, that the effort to reconcile those things occupied them for decades after.

For most of its running time, Cordura does its job well. Simply put, it tells the story of the effort to bring several Medal of Honor nominees from the middle of the desert to a railroad junction where they can be sent to Washington to be celebrated. Problem is, these guys are only situational heroes, and full-time mediocrities and scalawags. And Gary Cooper, as the man assigned to identify and transport them, suffers under the label of cowardice. So this is one of those Westerns in which the West represents a land before civilization, and characters are sent out onto a blasted moonscape to find out who they really are.

If only they didn't talk about it so much--because the actions, the visuals, the compositions, make the point so well. But one of the marks of an "adult" Western was that it explained itself, over and over. That can be ignored--but then the film loses the very quality it seeks to explore--courage. It has been building up to a brilliant climax--Cooper has undertaken a dangerous, self-sacrificing task in order to save one of these lowlifes, without help from any of the others. He is apparently dragged to a painful death.

Then one character spies their destination. All set for beautiful cosmic irony. Then...Coop's hand twitches and he gets up, and I suppose eventually he is All Better. What a shame. Someone should build a website entirely of movies that are terrific until the last ten minutes, then blow it badly.

And Rita Hayworth looks and acts spectacularly well. Back then, at 41, she was considered over the hill. What fools!
Posted by Lockhart at 10:48 AM