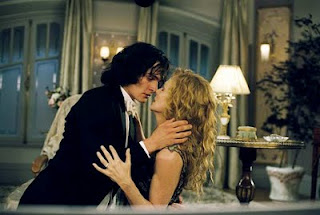 W.C. Handy wrote a song at the turn of the century called "Loveless Love" that remains so contemporary:

Stephen Frears, who ought to know better, attempted with Chéri (2009) to make a sexless sex film. The story is of a man who falls in love with a whore (and vice versa). There are only two ways to go with this story. Either the man is a fool, and you have a dark comedy like The Blue Angel or Never on Sunday; or else the man has a good reason for falling in love, in which case he is driven by sensuality which must be depicted, if your story is going to make any sense. But if you are too reticent about the scenes which form the heart of this relationship, then the film is going to crater in the center--which is just what Chéri does. The male lead seemed to be completely willing to doff his kit at all times, so I must attribute some of the film's modesty to Michelle Pfeiffer, who is still very very beautiful.

I had hopes for the movie. Frears had fun with sexy material in Mrs. Henderson Presents and the rest of his resumé is even more impressive. There is Christopher Hampton screenplay, some rollicking narration read jovially by Mr. Frears himself, and wonderful production and costume design. But the film has no apparent story, and I am reminded of the original play script of Room Service (best known for the Marx Bros. film version) in which the director envisions an ideal theater of the future (I am paraphrasing here): "No actors, no audience! Just scenery and critics!"