Never send an Australian to do an Englishman's job 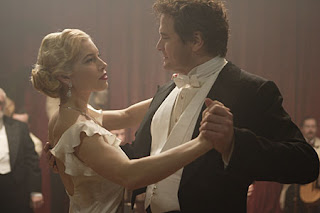 Best known for Priscilla, Queen of the Desert, Stephan Elliott is an Australian filmmaker whose films turn up at odd intervals with very little common thread among them. Given that he had not had a theatrical release in 9 years, I am curious why he should have applied one of his sporadic efforts to a 1925 Noel Coward play which has not had a major revival recently, and most of which Elliott chose to jettison in making his adaptation. I'm referring to Easy Virtue (2008), which gives us the old, old story of the unacceptably modern daughter-in-law who offends the traditional family. Coward's play was a melodrama, written before he became famous as a wit; Elliott has chosen to adapt the film as if it had been written later, as a comedy.

Many of the structural changes are improvements. But the problem is one of consistent tone. If you are going to comedy of manners, especially English manners, precision is required. You've got to hit it spot on. Are your villains going to openly display their contempt, or cloak it in mock-courtesy? In Kristin Scott-Thomas's performance, the mother constantly vacillates between fake sweetness and an outright rudeness highly unlikely among the English upper class.

It suggests a tone-deafness that may be attributable to Elliott's non-Englishness. Australian society has its classes, but it does not have the fine and subtle distinctions, nor the practice of dissembling hostility. Ozzies tend to say what they mean right out, manners be damned, which makes this film confused and confusing.

Nonetheless, Jessica Biel looks absolutely splendid in long white evening gowns, and my wife believes that ALL films should end with the heroine running off with Colin Firth.
Posted by Lockhart at 8:13 AM