Primitivism: an aesthetic or just primitive? 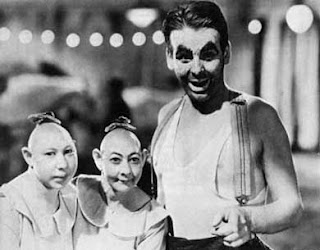 As our classroom Halloween observation in Film Studies, we looked at the infamous Freaks (1932), a film meant to be a horror film by its financiers, but which is largely a sympathetic character study with a grotesque climax spliced on to its story.

Director Tod Browning's initial impulse seems to have been both purely sympathetic and very humane. He seems not to have cared much about constructing a story at all. (The story was based on a story by the author of the source material for Browning's Lon Chaney film The Unknown.) Like a backstage musical, this story seems to have been merely a pretext. It appears that Browning simply wanted to put these outcasts on film as they were, without pretense. He strips this show business story of all its show business trappings--we never see anyone performing or on display until the final climactic shot. And although film historians believe that Browning never fully adjusted to sound film, this film would not have a fraction of the power it has if it were silent. Silent films all proceeded from a strange, nether-world of fantasy. Nothing is real in a world where blows never land, explosions don't shatter the eardrums, shouts never startle. All silent film is a fever dream.

But the strength of Freaks is that it is not a dream, at least until its truncated horrific ending. Until then, Browning doesn't even seem to be interested in entertaining us. Instead he brings us into an inverted world in which the freakish are normal and the "normal" people strive to be accepted by them (some for good reasons, some for greed). To this end, Browning's simple aesthetic--without camera moves, transitions, score music, special effects or even post-production work of any significance seems well suited. Here they are, Browning seems to say, just as they are, unadorned. Do not be horrified. Just see them.

Or it could be that this is just one of those films from the first era of talkies which is irredeemably primitive--bad sound, static or shaky camera, cheap sets, scratchy prints, and its simplicity is an accident of film history, just the way the freaks themselves were once called accidents of nature.
Posted by Lockhart at 11:15 AM