Quick, and quiet and clean he was 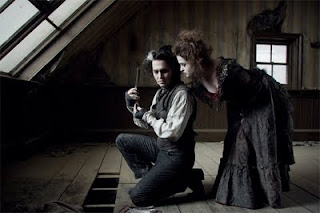 Re-watched Sweeney Todd (2007) to celebrate Halloween. I find horror films unrewarding after the first viewing, whereas a good musical brings new enjoyment each time. One of the delights of the musical, or any other tightly packed genre (westerns, films noir, screwball comedy) is that it is like a good wine, the finer qualities of which are slowly revealed as you let it roll on the tongue.

When the film was released, musical theater buffs like me all noted the extent of the cuts in the original work (plus some re-orderings) and felt those missing numbers like phantom limbs. Now, watching it a bit more objectively, I see the clear and clean purpose of those cuts and observe how swiftly and efficiently it moves from point to point, making Sweeney's descent into hell oh-so-inevitable. There is never time for him to stop and reflect, which is, I believe, implicit in the play, which lingers over the turning points. As much as Sondheim rejects Brecht as a model, he has certain Brechtian proclivities, most notably the rejection of straightforward representationalism and the employment of dialectic, or as Sondheim presents it, ambiguity. But you can't have ambiguity without choices, choices over which the play must dally for the audience to savor.

The film is more of a locomotive, and I think rightly so. We the audience are helpless in the face of a movie. (Theoretically, we could interrupt a play in the live theater--we don't, but we could, and many playwrights have had fun with that possibility.) We can do nothing to impede its progress. Even if we stop watching, or turn off the video device, the movie exists, fixed, its characters' fates forever sealed. And so, on film, Sweeney and Mrs. Lovett gallup toward their doom. We lose a bit of the glee that the play exhibited, but I am coming to prefer Helena Bonham-Carter's shrug to Angela Lansbury's (on-stage) knee-slapping. And Rickman as the evil Judge Turpin is superb, even a little vulnerable, as is his wont, compared with the cardboard mean-old-man-villain of the stage production. Let's not even start with the perfection of Sasha Baron Cohen. Why isn't he making those movies Peter Sellers used to do, where he plays three or four different people?

And finally, there's the music. It's so right. Do not watch this movie except with decent sound reproduction--stereo at least, external speakers if at all possible. The music department (orchestrator Jonathan Tunick and conductor Paul Gemignani) outdid themselves.