Flag down: 15 yards for illegal use of legs 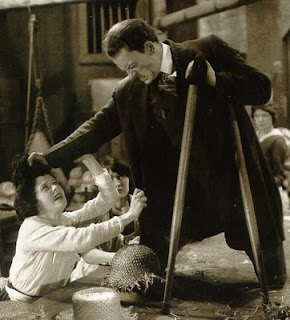 I programmed The Penalty (1920) starring Lon Chaney as a legless criminal mastermind as part of our Film Studies unit on acting. I had wanted to show The Unknown if only for the brilliant long take in which Chaney's character realizes he has had his arms lopped off for nothing. His reaction, laughter--which grows increasingly bitter and irrational as it goes on for an unnaturally long time, went a long way to convincing me of Chaney's brilliance as an actor beyond his bag of make-up tricks.

But I couldn't get my hands on a copy to show in the slot I wanted, so I thought it would be interesting to see The Penalty at long last, since still images from it were long familiar to me. Chaney's character is so evil that he gleefully poses for a bust of Satan. According to Chaney biographer Michael Blake, he gives one of his key performances in this film.

Honestly, as an admirer of Chaney, once he figured out how to tie his legs up and walk around on his knees, Chaney seemed to consider himself done. The rest of the performance is nothing but cheap-jack melodramatic sneering. Then, at the end, when he gets his brain fixed so he is no longer evil (seriously, that is the plot), and is a nice man, but has to go to jail anyway (that is The Penalty), he makes very sincere saintly looking faces. There is nothing in this film to convince students that there is anything to film acting other than mugging. This is absolutely the last time I schedule any film sight unseen.
Posted by Lockhart at 12:16 PM