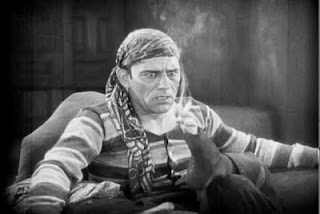 Even as a silent-film buff, I had only seen Lon Chaney's two most famous performances, in Phantom of the Opera and Hunchback of Notre Dame. But with Halloween on its way, it seemed appropriate to catch up on some of his other work.

Chaney's films aren't really horror films, but they dwell among the grotesque, bizarre and sometimes horrific. The Unknown (1927) is a prime example. Co-written and directed by frequent collaborator Todd Browning (best known today for the Lugosi Dracula and Freaks), the story is typically weird. It concerns a criminal with double thumbs who poses as Alonzo, an armless knife thrower, to avoid police detection. He falls in love with a young woman (played by a very young Joan Crawford) who is sorta sweet on Alonzo, since she has a phobia about men's arms and being touched. Alonzo blackmails a doctor into removing his arms, only to find that the young woman has fallen in love with someone else. Chaney's performance when he realizes what he has done to himself for no reason is still quite startling, ending in a cry which is no less piercing because there is no soundtrack.

The film's technique is rudimentary--it is all about Chaney's acting (which includes some well-staged stunts using a real armless actor). But it has set me off on the trail to see as much of Chaney's work as I can.
Posted by Lockhart at 10:22 PM