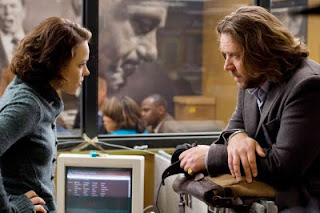 State of Play (2003) was a terrific twisty paranoid thriller mini-series from the BBC with an interesting cast of then-emerging stars, including James McAvoy, Kelly MacDonald plus the always reliable Bill Nighy. There was every reason to expect that the US feature film remake (2009) could create a similar excitement with analogous situations and twists in an American setting. And at first it really seems it will.

The film starts with great energy, evidently in the tradition of great newspaper pictures; you know, the disheveled but honest reporter who exasperates the editor, who really respects his work--the cub reporter eager to make his/her bones on the Big Story, racing through the big open office, the whole schmear. The tempo and the music of the montages is particularly invigorating, Ben Afflect seems particularly appropriate as a self-involved politician and we settle down for the big, fun ride.

Then the Emperor takes his clothes off. Whereas the BBC series seemed to uncovering layer after layer of shadowy, suspicious conspiracies and connections, each more shocking than the one before. Maybe we are not surprised by shadowy conspiracies in the States, but I also think the compressed running time (2 hours as contrasted with 6 hours for the source mini-series) forces the film to rush past its own story points, lightly touching on them like a water bug skimming the surface of a pond. Finally the film is no longer about who has power and how they use it, and degenerates into a hunt for a deranged killer. Just like we get three or four times per night on network TV.

There was a lot of talk in the industry this past spring about how the failure of this film was a bellwether signaling that big studios like Universal Pictures could no longer produce serious films for adults. But if this is the best they can do (even with Russell Crowe, Rachel McAdams, Helen Mirren and the rest of a superb cast), then maybe the studioes should leave grown-up movies to the grown-up independent filmmakers and investors, and stick to movies about guys in spandex who leap around and catch people in funny make-up.
Posted by Lockhart at 8:51 AM