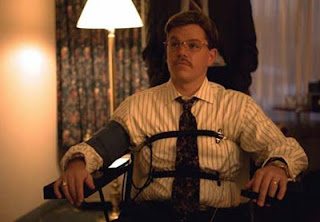 Don't get me wrong--I liked The Informant! (2009). But it did not feel as sure-footed as the critics had led me to believe.

For example, there's the hair. Sure, you can see that Matt Damon's hair is a bit goofy right to begin with (you can even see it in this picture). But it's too easy to ascribe that to the fact that you have a dweeb-turned-businessman in the Midwest 20 years ago. It's not clear that this hair looks as goofy to the people in the movie as it does to us. It is not until over an hour into the movie that Damon tugs at the wig and puts it askew that we can say to ourselves, "Oh, Mark Whitacre [Damon's character] is the only one who doesn't know this hair is goofy.

Yes, you have the improbably jaunty music by Marvin Hamlisch. But it is counterpoised with the fuzzy-documentary look, where everything has gone orange as if the cameraman inadvertently used the wrong filter (not to mention catching light flares in nearly every scene). See, the way you light comedy is--turn up the lights. Legendary director of stage farces George Abbott made that an iron-clad rule: "Turn up the lights. This scene is supposed to be funny." Dark is mysterious. Dark is dangerous. Dark is not funny, unless we're busting ghosts.

And Whitacre is a rather sad and pathetic character. It is hard to develop the distance we need to laugh at him. Neither Damon nor director Steven Soderbergh have done anything to give us permission to laugh at him--other than Whitacre's rambling, often irrelevant voiceovers and Hamlisch's faux-James Bond guitars and that late-arriving tug on the wig. Finally, about 75 minutes into an approximately 100 minute film, the lies start to tumble and tumble and tumble out, and thanks to the craftsmanship of all involved, the laughs start to come. I suppose the presence of actors such as Scott Adsit, Tony Hale, Patton Oswalt and the Smothers Brothers is supposed to encourage the laughs, although they seem to have been forbidden to be funny. (Oswalt in particular seems as though he could have a solid career as a character actor.)

But I can't help wondering what this film would have been with Jason Alexander as Mark Whitacre? His very presence would give us permission to laugh. And the hairpiece would have told us something about the film from the start. I presume the choice of a "dramatic" actor like Mark Damon was quite deliberate, a ploy to make the first part of the film ambiguous--maybe Whitacre really is a good, self-sacrificing guy, a little naive perhaps, but good. But if that's true, what is the music signalling us?

Stanley Kubrick had a similar experience adapting the book Red Alert. After some time with it, he informed his screenwriters that the story had to be a comedy. I understand that something similar happened with The Informant! [See the interview with screenwriter Scott Z. Burns in the September-October 2009 Creative Screenwriting Magazine -- not available online.] The problem is that the finished film feels as though nobody went back and changed the first half of the movie to fit with that idea.