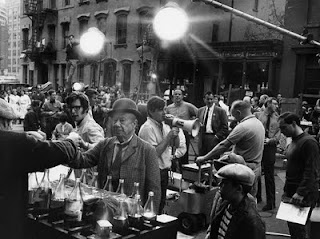 Just finished viewing The Night They Raided Minsky's (1968) again, this time with my Film Studies class. I've always enjoyed the seedy backstage atmosphere of this film, and the corny humor, but I scheduled the film in the course because in his book, When the Shooting Stops, film editor Ralph Rosenblum gives such a detailed account of how it was rescued in the editing room. He spent a year re-working it from what the studio executive called the worst first assembly he had ever seen to a reasonably pleasant entertainment.

The problem for the course is twofold: first, the point is made fairly early on in the film as to the devices that Rosenblum used to enliven the film; and those devices have become such common coin in film today that it is hard to see them for the innovations that they were. But then we are committed to seeing the film to the end to see how it turns out. Luckily, one of the best edited sequences, free of any gimmickry, is the suspense scene near the end when the we see how the strip was "invented." The cutting between the on-stage character and the audience with which she is interacting is impeccable.

And the film has never shown any signs of the agony it went through to become playable. Friedkin made good contributions, even if the success of the final result cannot be ascribed to him. The Lower East Side location is the best of its kind until Godfather Part 2, the principals are well cast (this was the last film of Bert Lahr and the first film of Elliott Gould--what does that mean?) and the extras who portray the audience--well, as my mother would say, you can practically smell them. There are other examples to demonstrate how an editor can "save" a film, and time will tell as to whether I decide to substitute them in a later year.
Posted by Lockhart at 11:27 PM